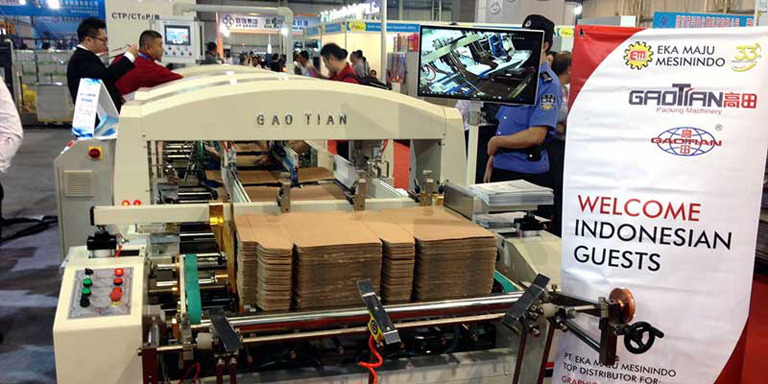 Adopting the watchwords "green, efficient, digital and smart," Print China 2015, held in Dongguan last April, set out to be the biggest yet, while aiming to improve overall quality. Capitalising on the strength of the domestic market, many exhibitors used the event as a launchpad for their latest products. The fair also showcased the global printing industry's latest innovations and key trends.

A prime example of this was office equipment giant Hewlett Packard, which launched the world's first digital press in 1993. The company was among the biggest exhibitor, occupying a 2,500-square-metre booth, where it unveiled
its Indigo 20000 digital press. Priced at just above Rmb20 million and boasting a print area of 736 x 1,100 mm, the system offers seven-colour printing and a speed of 31 metres per minute. Currently the widest printing format digital press available, it also offers the fastest speed and the largest colour mix among flexible package printing presses. Its print precision is also said to be close to that of offset machinery.

Hewlett-Packard said that the press is capable of applying different print to each sheet, with its built-in “mosaic” system able to apply 90,000 different page designs in a single run. The Indigo 20000 also comes with a dedicated Chinese interface, which also debuted at the event.

Among the line of digital printers showcased by Japan’s Fuji Xerox was a patent-laden system incorporating the Xerox Specialty Dry Inks technology, said to offer speeds of up to 20,000 sheets per minute.

Other global giants in the offset printing field also chose Print China 2015 to debut their latest products, highlighting the growing importance of the Chinese market to the international print industry.

China is new territory for Germany’s Heidelberg Company, the world’s leading offset printing brand, which attracted brisk trade during the event. Apart from the global launch of its Speedmaster CS 92 commercial format press, the company debuted its Linoprint C series digital printing system, jointly developed with digital printing leader Ricoh. The company also released its 4D digital printer, which is said to be capable of printing directly on curved surfaces.

The company reported a rise in demand from the domestic market for customised and small-volume printing. "We are now devoting more than 50 per cent of our R&D efforts into digital printing," said Zhang Peiwu, the Group's Chairman.

Many of the machines featured at the show recorded sales, with Shenzhen Jincai Packing Products Co reportedly closing Rmb13 million worth of orders for Heidelberg printing presses.

For Ricoh alone, more than 30 printing press transactions were confirmed in the first three days of the show. Overall, the value of prospective orders was said to total more than Rmb500 million.

The Post-Pandemic World: Sourcing Base and Product Development Expansion