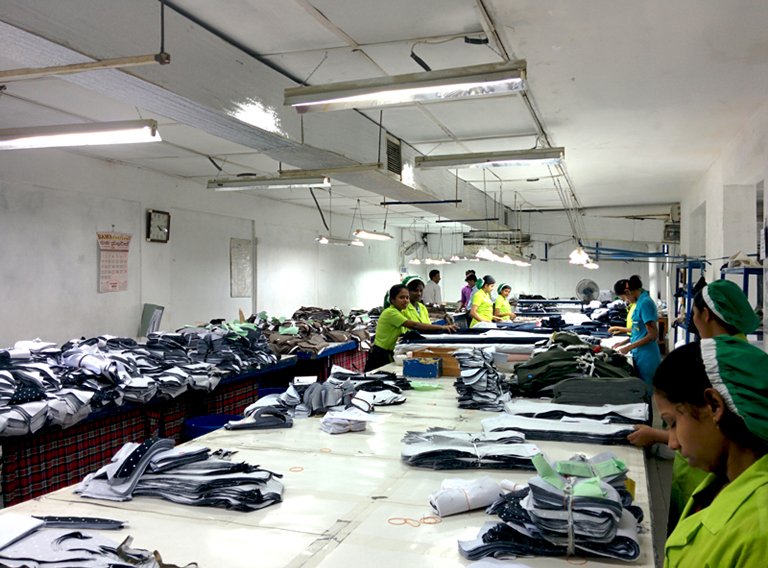 The apparel manufacturing sector has been a pillar industry of Sri Lanka for more than 20 years, despite the civil war which ended in 2009. This export-oriented industry is the highest foreign exchange earner in the country, accounting for more than 40% of its total export value. According to the Sri Lanka Apparel Exporters Association, Sri Lanka’s apparel exports rose annually by high single-digits from US$3.16 billion in 2009 to US$4.74 billion in 2014. The European Union (EU) and the US are the top two markets for Sri Lanka’s apparel products, accounting for close to 90% of the total.

With a population of only about 21 million, Sri Lanka’s apparel export value of US$4.6 billion (2013 figure for the sake of cross-country comparison) represents a tiny fraction of that of China (US$165 billion in 2013). It is also relatively small compared to other leading exporters in Asia, such as Bangladesh, Vietnam and India. In population terms, Cambodia, with about 16 million people, would be a more appropriate comparison. In fact, Sri Lanka has the second highest per capita level of apparel exports in Asia, trailing only Cambodia. Identified by the Sri Lanka Export Development Board as one of the key export sectors, the apparel industry projects its export value to rise to US$8.5 billion by 2020.

Sri Lanka is known as one of the world’s most renowned fashion sourcing locations, with a wide range of global brands - including Victoria’s Secret, Gap, Marks & Spencer and Nike - regularly buying from the island’s apparel manufacturers. This well-established global reputation has been built upon the strong fundamentals of the industry. In particular, these include high-quality product standards in the midst of a fast maturing apparel sector, as well as an established business culture that embraces social responsibility and environmental protection.

Competition among the low-cost apparel manufacturing bases in Asia is intensifying. Factories in Bangladesh and Cambodia, for example, generally offer buyers lower prices than in Sri Lanka, with cheaper labour costs a major contributory factor (see Production in Sri Lanka: A Higher Added Value Alternative for wages comparison). As a consequence, Sri Lanka has built its competitive edge on value-addition rather than cheap production cost, putting greater emphasis on product quality and its ability to manufacture niche products.

Given the labour-intensive nature of garment manufacturing, its pool of high-quality workers is essential for Sri Lanka’s apparel industry as it looks to move further up the value chain, both in terms of products and services. Generally, garment manufacturing companies in Sri Lanka provide a range of services to international buyers, including design, marketing and material innovation. The greater sophistication of Sri Lanka’s garment manufacturing companies, along with the attention paid to social and environmental issues, has enabled Sri Lankan exporters to out-compete many other regional exporters that focus largely on the production process, helping them realise bigger profit margins.

While Sri Lanka exports a variety of garment items, it has particular strengths in high value-added products, such as intimate wear and swimwear. According to UN Comtrade, Sri Lanka is the second largest brassieres supplier to both the EU and the US, accounting for about 10% of the supply in each of these markets. In addition, it is also the third largest swimwear supplier to the US, with 8% market share, trailing only China and Indonesia.

With its strengths in high-value addition and quality human resources, Sri Lanka would be a preferred choice for Hong Kong apparel companies considering alternative production bases. Those that seek a competitive edge in quality products targeting the middle-to-high-end apparel markets would benefit the most. During a recent HKTDC Research field trip to a foreign apparel manufacturer in Sri Lanka, it was highlighted that investment in product innovation and continuous staff training are essential requirements in order to hone competitiveness in this fast-developing country.

“Made in Sri Lanka”: A Brand Synonymous with Ethical Manufacturing

In addition to product quality and sophistication, Sri Lanka’s apparel manufacturers are renowned for their ethical sourcing credentials and the attention they pay to sustainable and environmentally friendly manufacturing practices. Over the years, the garment manufacturing community in Sri Lanka has tried hard to establish “Made in Sri Lanka” as a brand inextricably linked with sustainable development and corporate social responsibility (CSR). This approach has particular appeal to the international buyers from developed markets, where ethical sourcing has become an increasingly important issue among consumers.

Garment exporting manufacturers in various Asian countries have attempted to highlight or market their social compliance accolades. The problems reported in some low-cost production bases in recent years, however, have raised concerns among international buyers with regard to ethical manufacturing and sourcing. In particular, consumers in developed markets have been alerted to a number of factory tragedies where casualties were high. With no serious problems related to its ethical sourcing emerging recently, Sri Lanka has increasingly gained the trust of international buyers. It should be noted that factories in Sri Lanka are well known for adhering to the tight building construction standards, thus ensuring a high degree of labour safety and workplace security.

Sri Lanka’s apparel sector has been an active CSR promoter. “Garments Without Guilt”, a CSR programme launched in 2006, embraces a range of issues relating to ethical sourcing and sustainable development practices, such as women’s empowerment and eco-friendly manufacturing. Many apparel manufacturers in Sri Lanka have invested in projects observing such CSR principles. For instance, the world’s first custom-built green apparel factory and the first LEED [1] Platinum-certified garment factory are both located in this island state.

Hong Kong apparel companies can capitalise on Sri Lanka’s reputation for ethical manufacturing when setting up production facilities there. To maximise this comparative advantage over other low-cost production locations, they are advised to place greater emphasis on promoting and marketing these sustainable and ethical production practices. This would improve their prospects of winning orders from international buyers, particularly those from the developed markets.

Owing to the continued expansion of Sri Lanka’s apparel industry, its demand for textiles is fast growing. Currently, Sri Lanka has a heavy reliance on imported textiles. According to Euromonitor, the country’s industrial production of textiles amounted to only US$0.85 billion, while it imported more than US$2.2 billion of such items in 2014. UN Comtrade data shows that Hong Kong and the Chinese mainland are Sri Lanka’s major sources of textiles, accounting for more than 40% of its import total. This indicates a strong demand for textiles from Hong Kong, including both knitted and woven fabrics.

With its strong emphasis on product quality and producing niche products, Sri Lanka relies on imports of quality fabrics and accessories and, accordingly, and encourages overseas producers to set up domestically. Hong Kong companies able to ship quality fabrics to Sri Lanka should also consider setting up factories there in order to cater for this increasing demand. In fact, fabric manufacturing is classified as a key import substitution segment by the Board of Investment (BOI) of Sri Lanka. The BOI provides special incentives, including a five-year tax holiday followed by concessive corporate tax rates, for fabric manufacturers looking at setting up in the country.

While the bulk of the materials needed for garment manufacturing in Sri Lanka is imported, local sourcing is also on the rise. Aside from factories engaged in garment manufacturing, there are also many foreign and local textile and garment companies in Sri Lanka operating in different sections of the apparel value chain, including fabrics mills, washing and finishing plants, and clothing accessories factories. These companies have helped nurture an industry cluster with a ready supply of textiles, accessories and related manufacturing services. The emergence of a more sophisticated industry cluster, resulting in greater local supply, bodes well for the future development of the apparel sector in Sri Lanka. In a reassuring move, the World Economic Forum’s Global Competitiveness Report 2014-2015 now ranks Sri Lanka second in terms of local supplier quality among Asia’s developing countries [2].

Hong Kong garment companies considering setting up an alternative production base in Sri Lanka should not find it difficult to identify potential partners along the apparel supply chain. There are many upstream suppliers and an even greater number of downstream exporters. To gain better access to the required information or necessary resources for establishing business networks in Sri Lanka, joining chambers or industry associations, such as the Sri Lanka Apparel Exporters Association, is recommended.

Sri Lanka has strong trade ties with the EU and the US, the world’s largest developed markets. The EU, as the largest export destination for Sri Lanka’s apparel products, offers preferential treatment to Sri Lankan exports through the scheme of Generalised System of Preferences (GSP), under which Sri Lanka’s apparel exports have duty-free access to EU countries. However, the EU suspended Sri Lanka’s GSP-plus [3] status in 2010 on account of its non-compliance with three United Nations human rights conventions related to the end of the country’s civil war in 2009. While Sri Lanka continues to enjoy GSP benefits, major export items to the EU, such as textiles and garments, are subject to higher tariffs of about 5%-9%, instead of being duty-free under the terms of GSP-plus.

Following Sri Lanka’s presidential elections in January 2015, the EU is now considering the possible reinstatement of the country’s GSP-plus status, with the local business community understandably upbeat about this move. Hong Kong apparel companies should take this factor into account when considering relocating, and keep an eye on the progress of the negotiations.

As an island state in the Indian sub-continent region [4], Sri Lanka has established closer trade links with developing markets both inside and outside of the region (including India and the Middle East) than most other Southeast Asian production bases. In particular, India, the world’s second most populous country, is a key trade partner for Sri Lanka. Although apparel exports to India only account for around 1% of its total, Sri Lanka’s apparel sector is set to benefit from the fast-growing demand for quality clothing in India and is capitalising on their close proximity and close trade links.

Apart from the benefits due to the expected reinstatement of the EU’s GSP-plus scheme, it is worth noting that a Free Trade Agreement (FTA) between China and Sri Lanka is expected to be signed in 2015. Securing a Sri Lanka-China FTA should further strengthen bilateral trade relations. This is significant when it comes to achieving a level playing field with several key apparel exporters in Southeast Asia, including Vietnam and Cambodia. They currently enjoy preferential treatments through the ASEAN-China FTA, under which most of the products traded between the two economies are zero-rated. As indicated above, China is Sri Lanka’s largest source of textile raw materials. In light of this upcoming FTA, the cost competitiveness of Sri Lanka’s apparel exports is expected to improve on the back of cheaper raw materials being imported from China.

[1] LEED is one of the world’s most widely used green building rating systems and was developed by the US Green Building Council.

[3] GSP-plus is a special incentive given by the EU to economically vulnerable developing countries which have ratified and effectively implemented 27 international conventions in the fields of human and labour rights, sustainable development and good governance. (See more on http://trade.ec.europa.eu/doclib/press/index.cfm?id=515)

[4] Indian sub-continent usually includes the following countries – India, Pakistan, Bangladesh, Sri Lanka, Nepal, and Bhutan – though there may be different geographical definitions of the region.