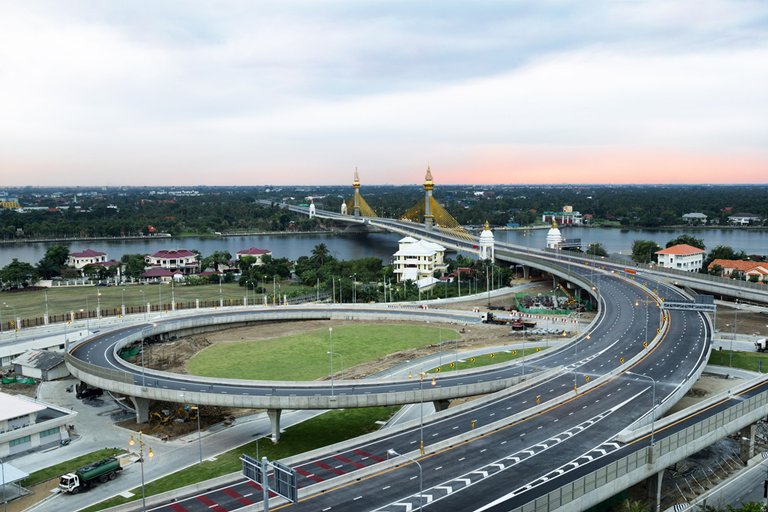 Centrally located in Indochina or Mainland Southeast Asia, Thailand is one of the key ASEAN transport and logistics hubs. More than 30 Thai provinces share borders with Myanmar, Laos, Cambodia and Malaysia. With production costs surging in China and some of the more developed ASEAN countries, foreign manufacturers are increasingly looking to set up bases in countries with lower production costs in the Greater Mekong Sub-region (GMS), particularly in Vietnam and Myanmar. The search for alternative manufacturing bases in Southeast Asia, however, has not diminished Thailand’s role as a regional manufacturing powerhouse, while it also fulfils the role of a key logistics hub for Indochina.

Exports account for more than half of Thailand’s GDP, while the manufacturing sector accounts for more than 80% of the country’s total exports. Apart from being the largest automotive producer in ASEAN, Thailand is also the trade bloc’s leading supplier of electronic parts and components destined for further processing in other ASEAN or Asian countries. It is also a major producer of electrical appliances. In essence, electronics is the largest export category for Thailand, with its output consisting mainly of computers parts, integrated circuits and parts, and related electrical items.

As the second largest exporter in ASEAN, Thailand plays a key role in the increasingly sophisticated regional supply chain, especially in terms of meeting the rising demand for cross-border logistics services. These services encompass transporting machinery and parts and components, as well as managing supply chain functions, from sourcing through to distribution. Thailand’s exports to other ASEAN countries grew by an annual average of 12% during the period 2009-2014, with a more rapid growth in exports to neighbouring GMS countries (Myanmar, Cambodia and Laos), which expanded by 20% annually over the same period.

In view of the emerging opportunities in Thailand’s logistics industry, many foreign logistics companies, such as DHL, UPS and Hong Kong’s Kerry Logistics, have already made inroads into Thailand. With the country’s political situation continuing to stabilise in 2015, Thailand’s prospects as a destination for market diversification and expansion have also improved recently.

With continual transport infrastructure development and improving customs efficiency, the cost of logistics in Thailand has been decreasing over the past decade. Costs went down from about 16%-18% of GDP during the period 2001-2008, to 14%-15% for the 2009-2012 period. In the 2014 World Bank’s Logistics Performance Index (LPI), Thailand was ranked 35th out of 160 countries and third among the ASEAN countries, outperforming most of its ASEAN peers, particularly neighbouring Cambodia, Laos and Myanmar. In particular, Thailand showed a significant improvement in the sub-indicator of trade and transport-related infrastructure over the previous 2012 LPI.

Thailand’s logistics sector is dominated by road transport, which accounts for about 80% of total freight volume. Road infrastructure is the most developed mode of transport in Thailand, with about 98% of its highway networks having been paved. Within the ASEAN highway network, there are 13 highways connecting Thailand with its neighbours, the highest number among the ASEAN bloc. Currently, the major highways linking Thailand to other GMS countries are routes within the ‘East-West Economic Corridor’, ‘North-South Economic Corridor’ and ‘Southern Economic Corridor’. These corridors form the backbone of the GMS transportation infrastructure.

Currently the most frequently used route by cross-border logistics companies is the East-West Economic Corridor (EWEC), which connects Myanmar's Mawlamyine Port in the west, through Central and Northeastern Thailand and Laos, to Vietnam’s port city of Danang in the east. This route allows faster access to the seaport in Vietnam from Thailand and Laos, hence reducing transportation costs by allowing land-sea multimodal transport. Currently, more than half of the 800-kilometre Thailand section of the EWEC is a four-lane highway, which is largely maintained in a good condition.

Due to its proximity to the emerging manufacturing bases in ASEAN, Thailand is a major sourcing hub of parts and components for the assembly plants scattered around the region. Thailand is ASEAN’s largest exporter of automotive parts, for instance, with more than 2,300 automobile parts suppliers in the country. Half of the output of these suppliers is exported to other production bases in Southeast Asia.

While Thailand is the most developed GMS economy, its capital, Bangkok, is also a key metropolis and commercial centre in Southeast Asia. The city is renowned as a major sourcing platform for lifestyle products, having attracted a host of international traders targeting the regional consumer market. Leading logistics companies interviewed during a recent HKTDC Research trip to Thailand said that an increasing number of Chinese and ASEAN buyers and exporters – in particular those from Vietnam, Myanmar and Laos – have a preference for concluding sourcing deals in Bangkok, where logistics companies can be conveniently appointed to manage product shipments to markets in the region.

Further regional integration by way of the ASEAN Economic Community (AEC) will create fresh business opportunities. Scheduled to be established by the end of 2015, the AEC aims to create a single market and production base in ASEAN, allowing for the free flow of goods, services, capital and skilled labour. In particular, there will be further tariff cuts for Cambodia, Laos, Myanmar and Vietnam (CLMV), where such barriers will be largely removed by end-2015.[1] Along with simpler and more harmonised customs procedures, the AEC is expected to boost trade between Thailand and the rest of ASEAN.

Thanks to the increasingly complex intra-regional trade patterns and industrial development, there is also growing demand for more sophisticated and integrated logistics services, especially by MNCs expanding their reach to ASEAN markets. In this regard, Hong Kong logistics companies may find growing opportunities in providing customised supply chain management services for foreign manufacturers and exporters targeting the ASEAN markets. (An upcoming article - “Opportunities in Thailand’s Logistics Market” – will examine the current market conditions and related issues.)

The increased level of manufacturing activities and the growing consumer markets in the GMS are fostering trade between Thailand and its GMS neighbours. Thailand’s border trade with its four neighbours reached some THB 900 billion (US$ 27.6 billion) in 2014. Malaysia was its largest border-trade partner, accounting for about half of Thailand’s total border trade, followed by Myanmar (21% share), Laos (15%) and Cambodia (11%). Cross-border trade by road has also become an important part of Thailand’s logistics industry. Many leading local and foreign logistics companies provide cross-border logistics services between Thailand and its bordering countries. Well Transportation Myanmar Ltd, a subsidiary of Sinotrans (HK) Logistics, was founded in 2010 to provide land haulage and trailer services across the borders of Thailand-Myanmar. Additionally, Sumisho Global Logistics (Thailand), a subsidiary of Japan’s Sumitomo Corporation, offers land transport services via Thai-Laos-Vietnam and Thai-Cambodia routes.

With the continual economic liberalisation of Myanmar and Laos, Thai border trade with these two countries is expected to flourish. In view of the formation of the AEC, many retailers and distributors are expanding border trade areas in the north and northeast of Thailand to capitalise on the opportunities arising from greater economic integration between Myanmar and Laos, a development that will stimulate demand for cross-border logistics services. (More details on Thailand’s border trade market will be examined in an upcoming article “New Trends in Thailand’s Retail Market”.)