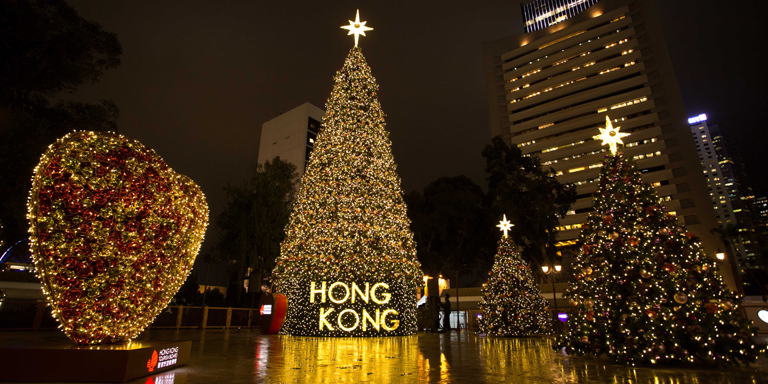 WinterFest is when Hong Kong sparkles with decorations, carollers and fireworks.

A shopping bonanza, festive feasting and dazzling neon can only mean one thing: it’s WinterFest in Hong Kong.

In this international melting pot of blended East-West cultures, the celebrations begin with Thanksgiving in late November, continue through the Christmas month of December, herald in the Western New Year in January, and extend through to Chinese New Year in mid-February.

American television network CNN has ranked Hong Kong among the top 10 places in the world to spend Christmas. Visitor numbers reinforce that, with the Hong Kong Tourism Board recording a 17.8 per cent increase in arrivals in January 2014, compared to January 2013, while last December’s arrivals were up by 12 per cent on the previous year’s result.

Retailers are also gearing up for a busy time. Last December, the sales volume of jewellery, watches and clocks, and valuable gifts increased by 15 per cent, according to the Hong Kong Government Census and Statistics Department. Medicine and cosmetics sales grew by 11.3 per cent, department store commodities by 7.8 per cent, and apparel by 4.4 per cent.

Among the iconic sights is a 30-metre-high Swarovski crystal Christmas tree glittering among the skyscrapers, attracting large crowds to Statute Square in Central.

The city, known for its neon, puts on spectacular light shows in various locations on both sides of the harbour. The Symphony of Lights, the nightly multimedia show involving more than 40 buildings on Hong Kong Island and Kowloon, also takes on a festive theme. The Pulse 3D Light Show is broadcast every night at the open piazza of the Hong Kong Cultural Centre.

At the International Commerce Centre (ICC), Hong Kong’s tallest building features a nightly music and light show, which transforms the 188-floor tower into a magical train ride through the snow. During the animated journey, sightseers will encounter ice sculptures and polar animals, reindeer skipping through ice-cream forests and angels sending love to Earth, before arriving at a snowy castle as vibrant fireworks sparkle in the night sky.

Playing nightly at 7.45pm and 9pm, the show sets a Guinness World Record for the largest light and sound show on a single building. The best places for viewing are the P3 and P4 public terraces of IFC Mall, which have advanced audio equipment broadcasting the music in sync with the show. People can also download the ICC Light and Music Show smartphone app to hear the music while they watch from the shores of Victoria Harbour.

Major retail malls are decked out in Christmas adornments for the millions who enjoy one of Hong Kong’s favourite pastimes – shopping. Some of the best include Harbour City and 1881 Heritage at Tsim Sha Tsui, Times Square and Hysan Place in Causeway Bay, ifc Mall in Central, Festival Walk at Kowloon Tong and Elements Mall at the ICC, in West Kowloon.

Also during this festive season, the Hong Kong Ballet stages the Nutcracker, while the Hong Kong Philharmonic performs selections of classic Christmas pieces at the Hong Kong Cultural Centre. Major displays are held in the city’s malls and public squares, while hotels and restaurants offer gourmet dinners. In the true sense of offering something for everyone, Hong Kong’s famous theme parks, Disneyland and Ocean Park, put on festive-themed displays and attractions.

By New Year’s Eve, a party atmosphere takes over the city. Throngs of cheering residents and visitors gather to countdown celebrations ushering in the new year. At 15-minute intervals, which begin at 11pm, buildings around Victoria Harbour emit a series of “shooting stars,” and at midnight, pyrotechnics will light up Hong Kong’s skies and illuminate the harbour.

WinterFest is presented by the Hong Kong Tourism Board, and supported city-wide by various businesses, organisations and individuals.