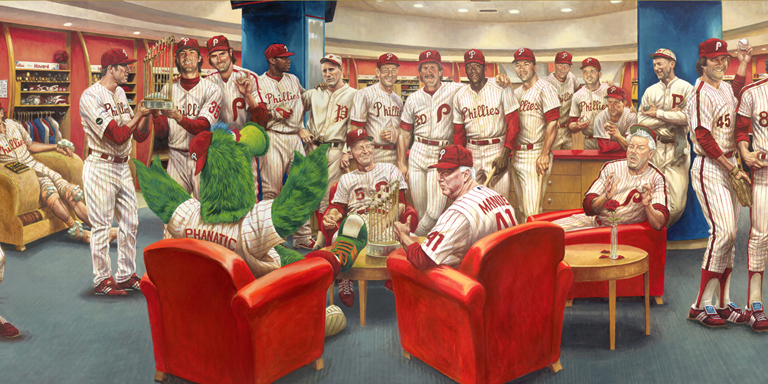 Australian sports artist Jamie Cooper set his sights on finding European football club contacts, which he got in Hong Kong.

Jamie Cooper is one of Australia’s most respected and talented sports artists, having held elite-level memorabilia licences for the Australian Football League (AFL), National Rugby League, Australian Cricket Board and Australian Olympic Committee. His highly prized paintings of the respective clubs’ histories and traditions have fetched prices of up to US$59,000 at auction. In January 2014, Mr Cooper’s attendance at the Hong Kong International Licensing Show opened important doors overseas – exactly what the former professional footballer-turned-artist was hoping to achieve.

Tell us about your background in both sports and art.
I was a professional AFL footballer for four seasons before retiring to develop my creative side. This led to stints as a commercial artist in London, painting public murals in Greece, and as a political caricature artist for a Danish national newspaper in Copenhagen. After returning to Melbourne in 1991, I produced commissioned portraits and sculptures, as well as hosted solo exhibitions.

When did your career as a professional sports artist take off?
In 1998, I was awarded the first release under the AFL memorabilia license. I created and developed the Team of the Century painting concept, producing major historical works for most of the AFL clubs.

The concept struck a chord with sports fans across the nation. The limited edition reproductions are highly sought after in the memorabilia market, with every edition selling out rapidly. The idea was unique and it worked. I knew it could be applied with equal success to the much bigger markets internationally. I produced a Dream Scene canvas for America’s Major League Baseball club, the Philadelphia Phillies. It was equally well received by the fans in the United States. The next goal was to present the concept of the Dream Scene to the European football clubs.

To do that, you exhibited at the Hong Kong International Licensing Show in January 2014. What happened there?
I met with English Premier League (EPL) clubs, Liverpool and Chelsea, through the Hong Kong Trade Development Council’s (HKTDC) Business Matching service. This service provided a perfect strategy for what I was trying to achieve. As a small business comprising one – myself, as artist/business director/marketer/business developer – it is very difficult to get the attention of a large global organisation like an EPL club. I had tried for five years to get through the door with e-mails to the front office at various clubs. I could only show my work as an image on e-mail, which had limited impact.

How was the Hong Kong Licensing Show different?
With what I do, it is all about the impact of the artwork. So the Hong Kong Licensing Show, and particularly the Business Matching service, gave me the opportunity to present my work in the flesh, directly to the licensing people at the respective clubs. These are the exact people I need to talk to, but who are so hard to reach, and to impress, via e-mail from the other side of the world.

Having a booth at the show meant I could display large-scale reproductions of my work. I was not there primarily to access the Asian market, or dependent on who walked through the door. My target market was already there and the Business Matching service provided a captive audience with a formal introduction through the HKTDC.

What was the result?
This led to lengthy negotiations with both clubs. With Liverpool, we have reached contract stage, but the project was put on hold until the 2015-2016 season while the club undergoes an expansion. Chelsea FC also loves the concept and we are continuing to discuss terms.

So the show was fruitful for you?
As an avenue for a small producer to gain direct access to an important and distant client, the Hong Kong International Licensing Show was perfect and produced the required results. It gave me my best chance with these clubs to engage them with my idea. The next stage is to lock down a deal now that I am in the door. If I hadn’t gone to Hong Kong, I would still be standing outside those doors with sore knuckles from knocking.